In the winter of 2009, lawyer, investment banker, and advisor on capital markets to the Director of National Intelligence and the Office of the Secretary of Defense, James Rickards took part in a secret war game sponsored by the Pentagon at the Applied Physics Laboratory (APL). The game’s objective was to simulate and explore the potential outcomes and effects of a global financial war. Two years later, Rickards published what would become a national bestseller, Currency Wars: The Making of the Next Global Crisis.

In Currency Wars, Rickards concluded that a dangerous global financial crisis was not only in the making, but that it was inevitable. Based on that financial war game inside a top-secret facility at the APL’s Warfare Analysis Laboratory, a historical analysis of international monetary policy in the twentieth century, as well as his assessment of the events leading to and adopted after the financial debacle of 2008, Rickards laid out the endgame that would result from the global financial chaos of the first currency war of this century; the collapse of the U.S. dollar and the eventual replacement of fiat money with a return to the gold standard.

“The world is getting closer to that end game every day,” warns Rickards, who just finished writing the sequel to Currency Wars, titled The Death of Money, The Coming Collapse of the International Monetary System.

Due out in bookstores next April 2014, The Death of Money picks up on the disturbing predictions outlined in Currency Wars and carries the analysis further into how the international monetary system might collapse and what new system will replace it. 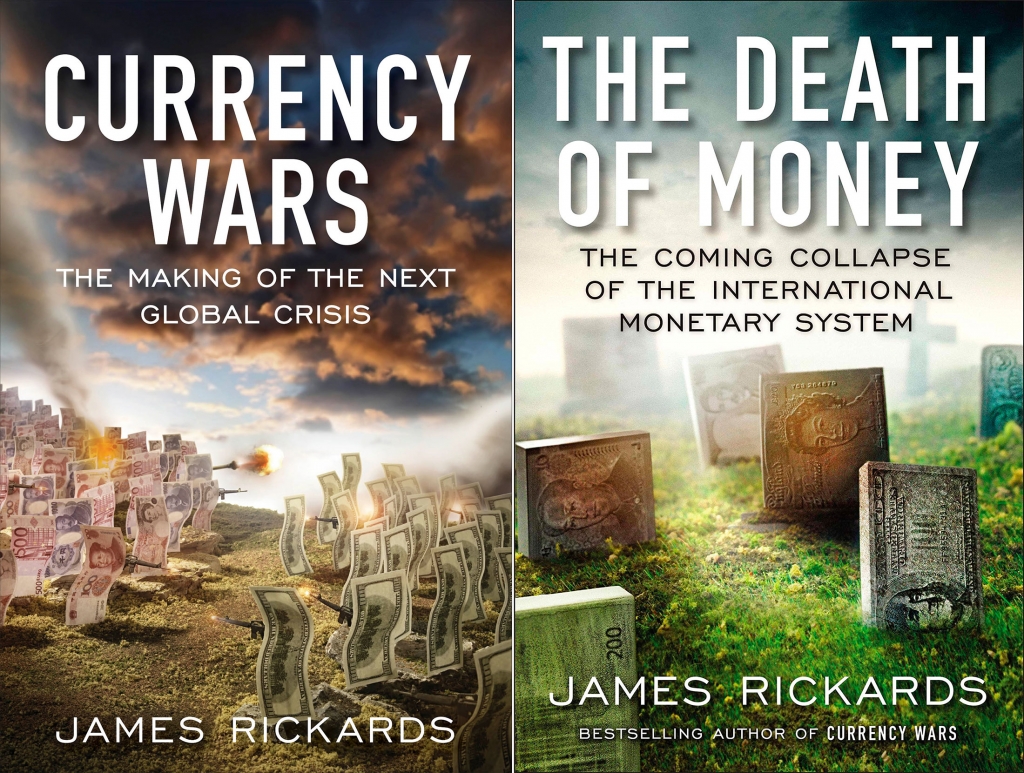 While Currency Wars “looked at global macroeconomics through the lens for foreign exchange rates including periods when exchange rates were pegged to gold and the more recent floating exchange rate period,” Rickards explains, “The Death of Money looks at the global macro economy more broadly considering not just exchange rates and the dollar, but also fiscal policy and the need for structural change in the U.S., China, Japan and Europe.” In addition, Rickards elaborates, “Currency Wars made extensive use of history to develop its main themes about the dollar and gold, The Death of Money relies less on history and more on dynamic analysis.”

Where some see a seemingly calm climate enveloping the global economy and financial markets eagerly embrace the U.S. Federal Reserve System’s zero interest rates and easing monetary policies, Rickards sees the prevalence of patterns that only confirm his forecast for an impending storm.

Rickards expects the Federal Reserve policies aimed at importing inflation into the United States “to offset the deflation that had arisen because of the ongoing depression and deleveraging” to continue well into 2015 and perhaps beyond. He also points to other developments that are aligning in favor of the increasingly demise of confidence in the dollar as the world’s reserve currency: “U.S. fiscal policy, stockpiling of gold by Russia and China, money printing by Japan and the UK, and the rise of regional groups such as the BRICS.”

I expect the Mexican economy to outperform the U.S. economy in the years ahead.

So how does the rest of the world currently fare up in Rickards’ analysis? Asked about Mexico, the United States’ second-largest trading partner, he explains:

“The Mexican and U.S. economies are closely linked because of NAFTA and immigration and that will continue to be the case, however, the U.S. will be less important to Mexico in the future and China will become more important. The U.S. should expect increasing inflation in the years ahead because of its reckless monetary policy. Mexico should be able to avoid the inflation because of its energy exports and relatively inexpensive labor. The result will be a gradual strengthening of the Mexican peso against the U.S. dollar, something that has already appeared. Mexico will be a major magnet for Chinese investment also. In short, I expect the Mexican economy to outperform the U.S. economy in the years ahead. Mexico will begin to delink to some extent from the U.S. and to link more closely with the rest of the world, especially Europe and China.”

The euro is the strongest major currency in the world and will be getting stronger.

Rickards is also bullish on the European Monetary Union, as he underlines that “the euro is the strongest major currency in the world and will be getting stronger.”

Yet some analysts today warn of the euro’s increased appreciation as a dangerous centripetal force to the euro zone’s integrity. Why does Rickards see the opposite?

“Most analysts do not understand the dynamics driving the Euro. They mistakenly assume that if growth is weak, unemployment is high and banks are insolvent that the currency must we weak also. This is not true. The strength of a currency is not driven by the current state of the economy. It is driven by interest rates and capital flows. Right now, Europe has high interest rates compared to the U.S. and Japan and it is receiving huge capital inflows from China.”

Will Germany go all in to preserve the European single currency?

“Germany benefits more from the Euro than any other country because it facilitates the purchase of German exports by its European trading partners. Citizens throughout Europe favor the Euro because it protects them from the devaluations they routinely experienced under their former currencies. No countries will leave the Euro. New members will be added every year. Germany will do whatever it takes to defend the Euro and the European Monetary System. Based on all of these developments, the Euro will get much stronger.”

What about Spain with its increased poverty levels, 2003 per capita income levels, a soon-to-reach 100% debt to GDP ratio and massive unemployment? Isn’t a strong currency the opposite of what the country needs?

“The difficulties Spain has faced for the past five years are part of a necessary structural adjustment to allow Spain to compete more effectively. Most of this adjustment is now complete and Spain is poised for good growth in the years ahead. Unit labor costs have declined more than 20% since 2008, which makes Spanish labor more competitive with the rest of the world. Unemployment is difficult, but it gives Spain a huge pool of untapped labor that is now available as new capital enters the country. Increased labor force participation from among the unemployed will allow the Spanish economy to grow much faster than its overall demographics would suggest. The Euro has given Spain a strong currency, which is extremely attractive to foreign investors. Ford and Peugeot have recently announced major new investments in Spain and more should be expected. Chinese capital is also eager to invest in Spanish infrastructure. Spain has successfully made structural adjustments and put its major problems behind it, unlike the United States where the structural problems have not been addressed and painful economic adjustments are yet to come.”

Agencies such as the Defense Department and the intelligence community are concerned about the future stability of the dollar.

Given the national security aspect to Rickards’ work and the mere threat on the dollar’s future stability, one would expect for the defense and intelligence community in the U.S. to pressure policy makers into taking action. Not the case, says Rickards:

“Various government agencies and private think tanks and corporations have continued to do war game type simulations of financial warfare and attacks on capital markets systems since the Pentagon financial war game in 2009. I have been an advisor to and a participant in many of these subsequent efforts. However, these national security community and private simulations have had very little impact on policy as pursued by the U.S. Treasury and the Federal Reserve. Agencies such as the Defense Department and the intelligence community are concerned about the future stability of the dollar, but the U.S. Treasury is far less concerned. This has created some tension between those who see the danger and cannot do much about it, and those who can affect dollar policy but do not see the danger.”

Ultimately, however, Rickards argues that if his predictions come true (and in his opinion it is only a matter of time), the collapse of the dollar would lead to a reset in the world’s monetary system whereby gold would regain its historic role as the standard unit of value. What happens after the end of fiat money would then depend on how each country is positioned in terms of its gold reserves.

Can the point of no return in the path to the death of money be averted?

“The point of no return may already have passed,” says Rickards, “but the consequences have not yet played out.”

In Rickards’ view, it’s a catch-22 situation from this point forward: “the Fed has painted itself into a corner. If they withdraw policy and reduce asset purchases, the economy will go into a recession with deflationary consequences. If the Fed does not withdraw policy, they will eventually undermine confidence in the dollar. Both outcomes are bad, but there are no good choices. This is the fruit of fifteen years of market manipulation by the Fed beginning with the Russian – LTCM crisis in 1998. The Fed will cause either deflation or inflation, but it cannot produce stable real economic growth.”